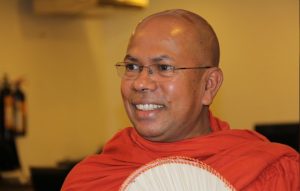 Ven. Kiribathgoda Gnanananda Thero is the founder of Mahamevnawa Buddhist Monastery. He was ordained on 26 March 1979 at the age of 17,  under Dambagssare Sumedhankara Thero and Dikwelle Pannananda Thero at Seruwavila. He received a traditional Buddhist academic education and entered the University of Sri Jayawardenepura. Having understood the inability to achieve what he wanted in a university, he quit and started visiting meditation centres and hermitages.

His deep practices of meditation and the understanding of Buddhist philosophy later, led him to start up his own Buddhist monastery, Mahamevnawa in 1999 under the guidance of Kotapola Amarakitti Thero, in Waduwava, Polgahawela.

Ven Kiribathgoda Gnanananda Thero has translated the sacred Pali Canon to a comprehensible style in Sinhala, a local language of many Sri Lankans. In addition, he has written many books about the discourses of the Supreme Buddha; about ninety books have been published to date. There are also hundreds of audio cassettes and CDs of talks. In addition Mahamegha Dhamma magizine  and Shraddha TV  take the message of Dhamma in to the homes of thousands of lay followers around the world.

“I welcome you all to Mahamewnawa with thoughts of good will. Within our Dhamma service we have no restrictions with regard to race, cast, language, colour or religion. The truth revealed by Gautama Buddha is open to everyone. If you are wise to understand that truth, then that truth is for you and for your own good and protection. Therefore, let us gather around that truth, the righteous Dhamma. Let us learn it, understand it and live accordingly. Let us share this splendid gift of Dhamma with everyone. That is our noble duty. May you all be blessed by the Buddha, the noble Dhamma and Sangha, good noble friends in Dhamma and all deities!”